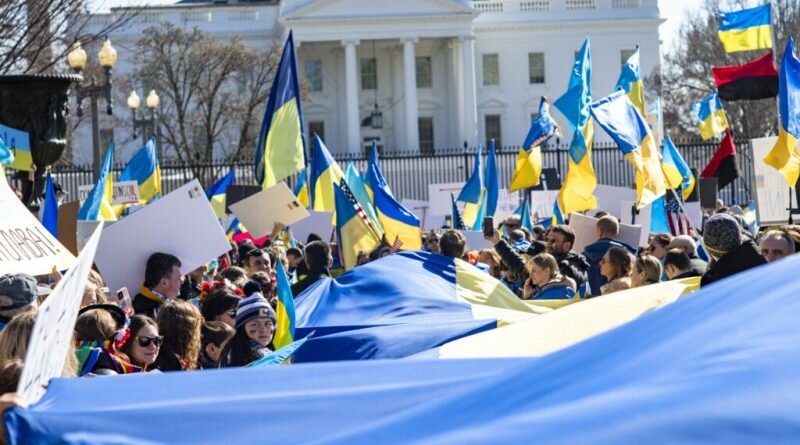 A rally for peace in Ukraine will take place outside the White House in Washington on February 27.

A rally for peace in Ukraine will take place outside the White House in Washington on February 27.

When Ukrainian families arrive in California, they will find some of the country’s best-prepared schools to help children who have fled violence abroad and are trying to adjust to life in a new country.

School districts across California, from urban centers to rural outposts, have long served immigrant students from war-torn regions and have established programs to help those students thrive. That includes mental health care, English-learning assistance, summer programs, assistance with college and financial aid applications, and other services aimed at helping refugee students and their families. Some districts, including Oakland Unified and San Francisco Unified, even have schools designed specifically for newcomers.

“This work is in our blood,” said Lydia Acosta Stephens, executive director of Los Angeles Unified’s multilingual, multicultural education division. “We see that genuine smile and eagerness that they have to learn. That twinkle in their eyes. And we will do everything we can to make those dreams come true.”

The number of Ukrainians who have come to California since the Russian invasion is unknown, but by 2020 more than 60,000 Ukrainian immigrants lived in California, the second largest population after New York, according to the Public Policy Institute of California. Most of those immigrants lived in the Sacramento area, but thousands of others lived in Los Angeles and the Bay Area.

Since the Russian invasion of Ukraine in February, more than 11 million people have fled the country as the bombing continues relentlessly. The United States plans to accept at least 100,000 through formal refugee programs, but thousands more seek asylum at the US-Mexico border or arrive by other means.

Sacramento City Unified has welcomed at least 12 new students from Ukraine since the start of the war. The district provides comprehensive support to immigrant students, including a free vaccination clinic, mental health services, English classes, and services for families such as help finding a job and settling in the US. Afghan refugees who arrived last fall found similar support in Sacramento, Elk Grove and other districts.

At the St. Vladimir Ukrainian Orthodox Cathedral in Los Angeles, workers are busy helping new arrivals and rallying support for those still in Ukraine. During Easter services last month, the church had more than 1,000 people in pews, about four times more than usual, Reverend Vasile Sauciur said.

Many of those families plan to stay in the United States temporarily until the war is over, but as their children get used to school and make friends, it will be harder to leave, Sauciur said.

“The children will not be homesick, because if their houses are bombed, there will be nothing for them to go home to. Home is just a memory,” he said. “But they might be a little scared because the schools here are different. There are new rules, new expectations. It is difficult. Teachers and classmates will have to be patient. But these kids are very strong.”

Los Angeles Unified is also seeing a slow influx of Ukrainian students, as well as Russian students. LAUSD has a long history of supporting students fleeing violence abroad and has one of the state’s most robust programs for immigrant students and their families. About 25% of students in Los Angeles are immigrants and 20% are English students. The We Are One LA Unified website provides information about deferred action for children’s arrivals, school enrollments, meals, and other resources. The district offers English language classes in Spanish, Armenian, Mandarin, Korean, Filipino, Russian, Afghan, and native Guatemalan languages.

In addition, most teachers in the 600,000 student district have training in bilingual education and recognizing students who have experienced trauma. Typically, students who need help are matched with mental health psychologists or others who can help with the issues the children or their families are facing.

“Traditionally, LA Unified has been a gatekeeper – and a mirror – to what’s happening in the rest of the world. We see arrivals from everywhere where there is conflict,” said Pia Escudero, the district director of the Department of Student Health and Human Services. “Many have seen horrific things at home or on their journey, but trauma does not define them. We strive to stabilize factors so that children can thrive and be all they can be.”

Many of the students have high hopes for their new life, she said.

“They want to be doctors, firefighters, entrepreneurs. Immigrants make a huge contribution to our city and our country,” she said. “If this country has taught us anything, it’s how important it is to welcome international newcomers.”

Another important aspect of welcoming students from war zones is curriculum that is relevant to the experiences of students and their families, said Roxanne Makasdjian, director of the Genocide Education Project, a San Francisco nonprofit that helps schools teach. on human rights and genocide. By educating all students about the violence and horrors that have occurred in different parts of the world, such as the Holocaust during World War II, the Armenian Genocide and the repeated wars in Ukraine, students can gain empathy and tolerance for their newly arrived classmates. said.

“Understanding the struggle for human rights can reduce people’s ‘differentness’,” she said. “It can validate students’ personal identities and stories and help students connect with each other. It can help build understanding and encourage humanity to help each other. … It can be a lifeline.”

Makasdjian’s organization has helped more than 6,000 high school students across the country teach about genocide, war, and human rights.

In the Orthodox Cathedral of St. Vladimir, Sauciur made a similar point. With regard to schools, he said, the story transcends the experience of individual Ukrainian refugees.

“This is not just about Ukrainians being evicted from their homes,” he said. “It’s about humanity.”

To receive more such reports, click here to sign up for EdSource’s free daily email on the latest developments in education.